In order to achieve its objective, DGZ can rely on an extensive network of partners, such as, for example, the public services that have entrusted a number of important tasks to DGZ; constant dialogue with livestock farmers, but also with the FASFC (Federal Agency for the Safety of the Food Chain), the FPS Public Health, Food Chain Safety and the Environment, the FPS Economy, farmers' organisations, the Farmers' Union and the ABS, veterinarians' associations, research institutes, colleges and training centres is also crucial. data security that manages DGZ is an important starting point.

In 2016, DGZ's ICT infrastructure was given a facelift during the renovation work during which the employees moved from the Drongen site to the Torhout site. Kris Declercq, system manager at DGZ, explains the intervention: "We were looking for a reliable partner who has a good reputation with our main suppliers (HPE, Fortinet, Microsoft...) and a high, if not maximum, level of expertise. certificationVanRoey.be was a winner in the rounds of tenders, and when this company was able to offer us the best value for money, the bullet went quickly. Together with VanRoey.be, the core network switches, firewalls, fast storage (SAN storage), servers and PCs were also renewed during intensive renovation works.

First, the core switches were replaced by three new devices, which now form a logical whole. They have ten times more bandwidth.

And with a switching capacity of 10 Gb/s with which a DVD, for example, can be sent within 5 seconds, we are looking forward to the future. After eight years of service, the phased-out switches have been given a second life as an 'ip-telephony switch', a task that they are still perfectly capable of handling.

Getting ready for the General Data Protection Regulation of GDPR

After the switches, the firewall infrastructure was tackled and through its activities DGZ has a great deal of sensitive information in various databases, which is why DGZ has been working intensively on the security of its data since the 1990s. Kris is particularly aware of the importance of the security of this data: "We act from a certain level of awareness, and a clear plan of action against possible breaches of the GDPR is crucial to be able to demonstrate that we are doing everything possible to protect our data".

Easier management and set-up thanks to consolidation

Declercq: "The preparation was not easy; By phasing out the site in Drongen, we have simplified the network configuration. Where

The newcomers, two FortiGate 400D Firewalls, are a lot more powerful and allow us to apply a new generation of security technologies (UTM) to our network. The new network structure has been constructed in such a way that only one access is possible from the outside. Thanks to this centralisation and consolidation, we can monitor our entire network with one device, and it is a great simplification both in terms of configuration and in terms of retrospective management. The second FortiGate 400D serves as a back-up.

"It is remarkable that the total changeover was realised together with the specialists of VanRoey.be with barely a quarter of an hour's break for the DGZ network. This way, an optimal service for our partners, suppliers and employees remained possible!

In addition, DGZ has a lot of confidential information that can be consulted online selectively by customers and partners of DGZ. In order to guarantee a good protection of the web application, the reverse proxy was also replaced by the FortiWeb web application firewall application: "The applications of our Fortinet devices are vital for the safe operation of our organisation," concludes Kris.

"The production storage at DGZ has also been replaced by a new device, a 'HPE 3Par'. The phased-out storage has been transferred to the test environment and we now have 50 TB of high-speed storage capacity. The 3Par is a very long-term investment, as it can be expanded or accelerated if necessary due to its modular structure.

In order to replace the depreciated servers, new servers have been taken into production. Thanks to their large memory capacity and improved computing power, four copies today were more than enough to replace seven (!) predecessors. And since the new generation of servers is equipped with energy-efficient technology, there are also ecological gains to be made.".

The previous major changes were completed just in time for the relocation of colleagues from the Drongen site to the Torhout site, and the network was restructured and new PCs (desktops and laptops) were set up. Kris: "We also had to configure the new telephones, which also use the accelerated data network, so that many colleagues in the new offices can start with new PCs and modernised telephony. The workstations are configured in such a way that the day's work can be carried out anywhere, regardless of where the work is done.

Continuity and peace of mind through better insight

Declercq: "Ever since the previous installation in 2012, we haven't had any problems worth mentioning (it's true for wood), and we want to keep it that way. In order to ensure continuity, we work on prevention. Managed Services from VanRoey.be Our infrastructure is continuously monitored. VanRoey.be employees are notified as soon as memory threatens to fill up, a hard drive signals that it is at the end of its useful life, licenses are in danger of lapsing... We then discuss the issue and the possible consequences together, and we intervene before the damage has even been done, even outside office hours with hard guarantees.

In addition, I receive an extensive monthly report in which all monitored devices, issues and actions taken are accurately listed. I also receive weekly reports from the FortiAnalyzer that give me insight into problems or peaks in bandwidth usage, certain trends, IP problems, etc.

The very good uptime figures prove the usefulness of Managed Services: we invested in peace of mind, which is today's digitised world, under constant threat of hacks, leaks and immense GDPR fines of priceless importance. We can just about let go so that we can focus on more important matters, we can always count on VanRoey.be, as was already clear during the installation of the infrastructure, because working during renovations is never obvious and usually last-minute, but VanRoey.be's experts always respond and switch quickly and quickly again. smooth cooperation ...just to emphasize."

VZW Dierengezondheidszorg Vlaanderen (DGZ) supports Flemish livestock farmers in the sustainable production of safe food using healthy animals. Its 170 employees are responsible for the identification and registration, laboratory tests and health care of ruminants, poultry and pigs from Lier en Torhout. Thanks to the customer services at both sites, every Flemish livestock farmer or veterinarian can easily reach the organisation.

The very good uptime figures prove the usefulness of Managed Services. We invested in peace of mind and that is today's digitized world, under constant threat of hacks, leaks and immense GDPR fines of priceless importance. We can just about let it go so that we can focus on more important matters.”
Kris Declercq
System Administrator at DGZ Flanders 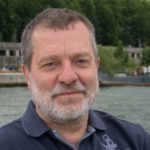